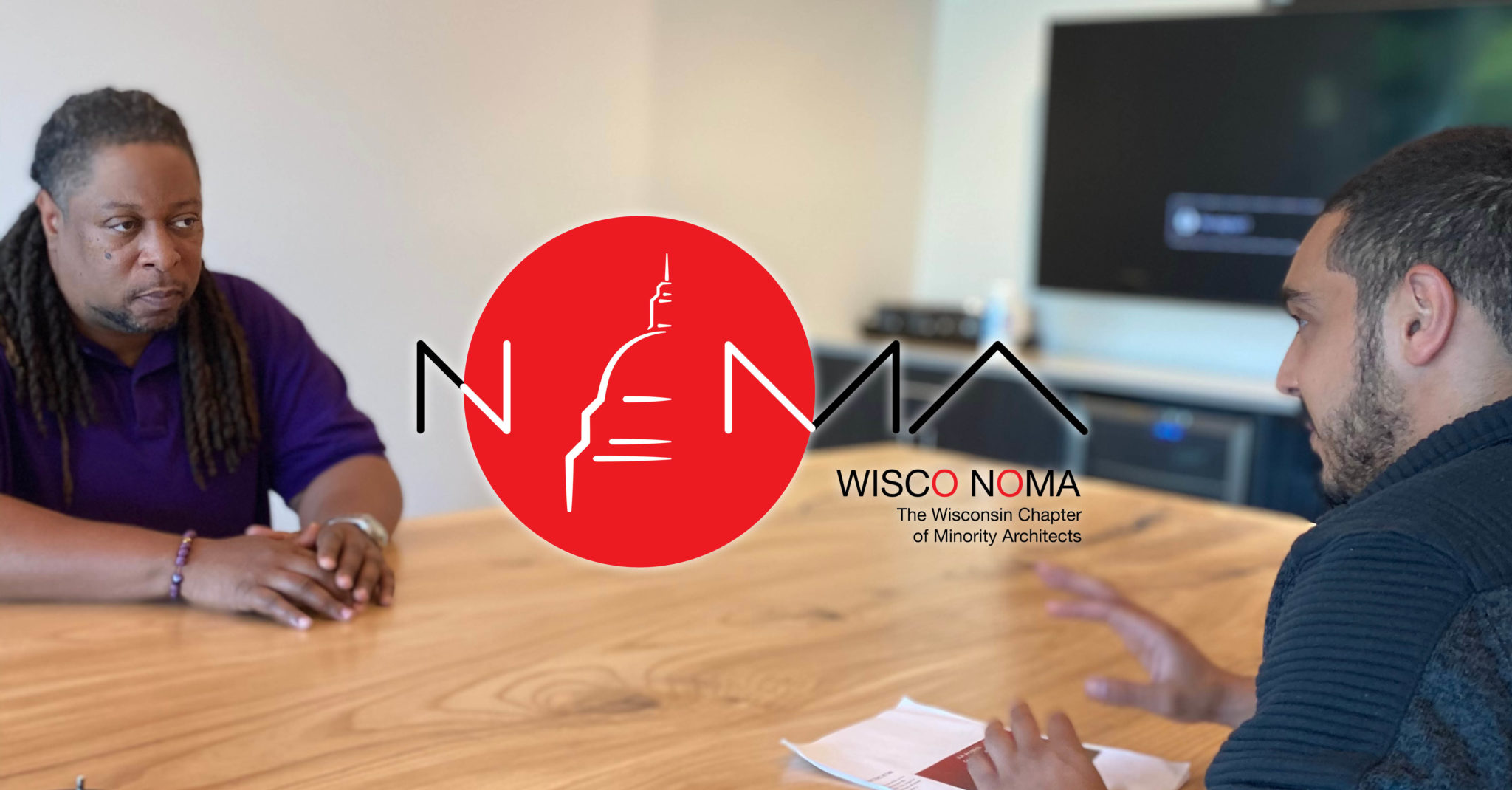 The National Organization of Minority Architects (NOMA) never had a Wisconsin chapter until a group of local architecture professionals changed that last fall. JLA sat down with members Rafeeq Asad and Muhammad Shehata to discuss WISCO NOMA and how it’s impacting Wisconsin. Rafeeq & Muhammad are project specialists at JLA’s Madison office.

JLA: How long has NOMA existed? What’s the mission?

Rafeeq: “NOMA has been around since 1971. It was started at an American Institute of Architects (AIA) convention in Detroit by a group of twelve African American architects.”

Muhammad: “NOMA’s focus is to promote diversity in the design professions by fostering community engagement and the professional development of its members. NOMA also works with local, state, and national governments on issues affecting our communities.”

JLA: How did WISCO NOMA get started?

Rafeeq: “Mike Ford and I have been discussing starting a chapter since I moved to Wisconsin in 2013. We officially received our charter last October at the NOMA national convention in Brooklyn. To date, we have an upwards of 20 members between Madison & Milwaukee.”

Muhammad: “We’re all from various firms. There are five of us who serve as officers: Marion Clendenen-Acosta (Kahler Slater) is our president, Wekeana Lassiter (Flad Architects) is our vice president, I’m the treasurer and our secretary is Teonna Cooksey (Orchestra Design Studio). We also have Kouyate Toure (Flad Architects) who serves as our parliamentarian. So NOMA is really fostering relationships between firms.” 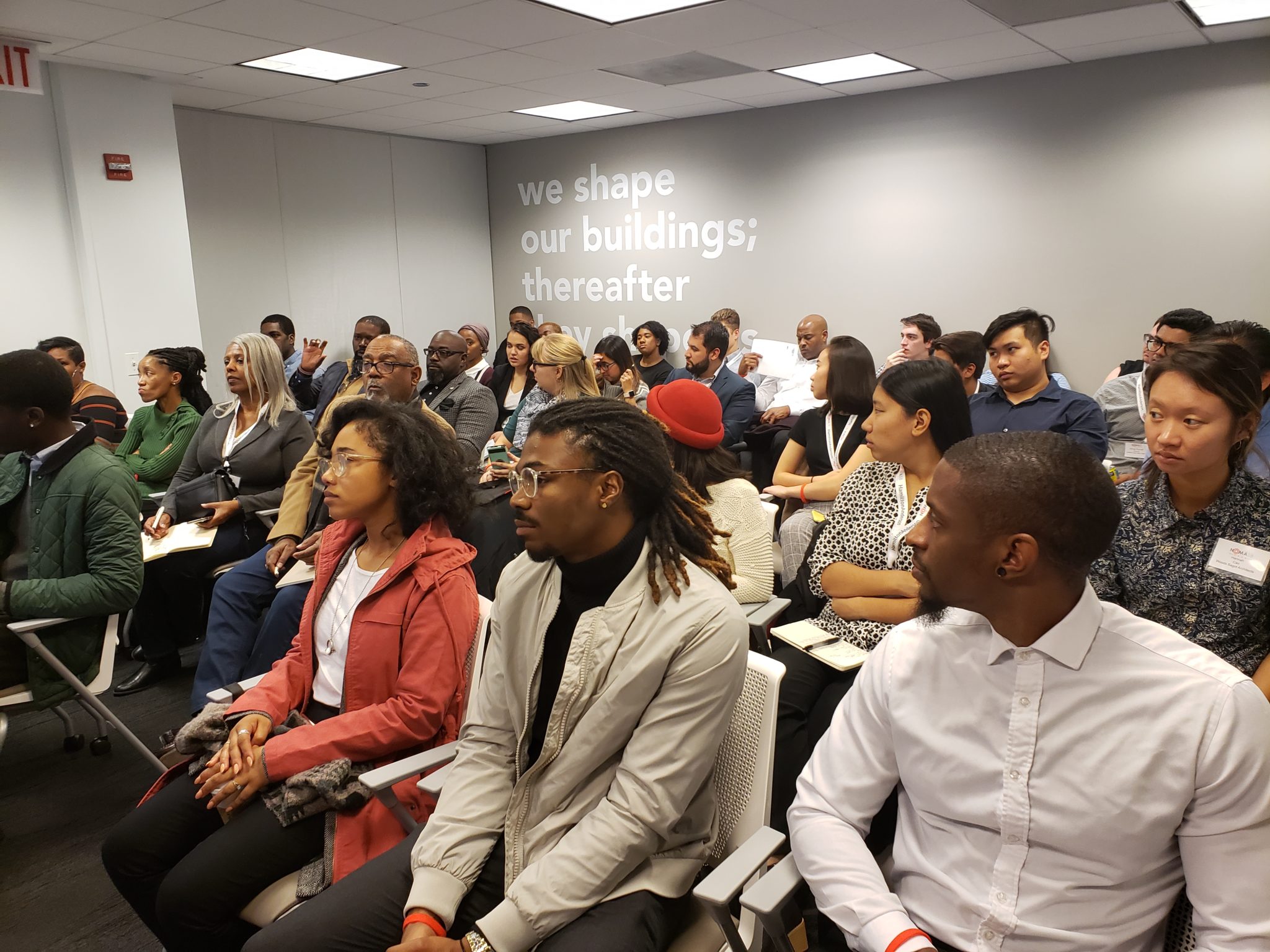 JLA: What type of barriers and challenges is NOMA Wisconsin trying to address?

Muhammad: “Many minority children don’t even know what architecture is. They want to be what you see on TV, like a basketball player. We work to bridge the gap of knowledge that minorities have regarding architecture. With everything that’s happened in 2020, it’s clear how there’s a lack of minorities in leadership. NOMA wants to change that. We help our members build leadership skills which in turn makes them great candidates for leadership roles within their firms and the community where they can make an even bigger impact.”

Rafeeq: “The architecture industry is predominantly white males. In general, you won’t find many minority children who know or have interacted with professionals who look like them.

So we want to increase interest in architecture careers and bring awareness to all minorities and other underrepresented students.”

Muhammad: “Personally, I grew up in a predominantly white area and I felt different from everyone else.  When I started to pursue architecture, it amplified that feeling even more. I saw there was a need for inclusion and in general, I felt there was a lack of support for minority professionals. I had seen and experienced racism in everyday life and was able to brush it off. But when it affected me professionally, I knew I needed to make a difference and make sure no one else is treated that way. NOMA gives us the opportunity to change the status of our profession and minorities within it.”

Rafeeq: “Beyond reaching out to students, we want to support professionals already in the field. In Wisconsin, we have very few minority architectural professionals. Normally, Madison and Milwaukee would be separate chapters; but we just don’t have the numbers to support that.

We have 20 members today and we want to make sure we not only grow but also keep those 20 members into the future. To support this, we plan to offer programming focused on professional development which will range from study sessions for those pursuing their licensure to social networking events.”

JLA: How does NOMA affect Wisconsin and the nation?

Rafeeq: “NOMA will impact Wisconsin’s workforce and will help grow, attract, and retain minority professionals. [It’s] not an easy task as the architecture world is very transient. In this industry, professionals change firms often and move around the country.

Giving minority professionals a sense of community and belonging along with professional development opportunities encourages them to stay, which is great for Wisconsin’s workforce. 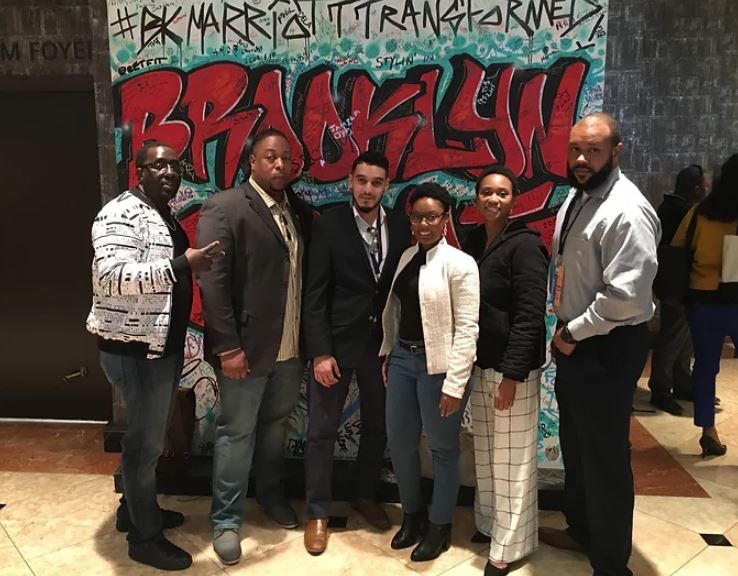 There is a huge opportunity for NOMA to influence government policy and social justice issues. Together, we can help create more inclusive communities. In the future, we also plan to do a networking mixer and invite local community leaders.”

Muhammad: “NOMA has a student chapter as well. For our last event, we met with that chapter’s UW-Milwaukee students as a networking mixer. Students were able to make professional connections and gain valuable insights to help build their portfolios.”

JLA: What can local businesses do to help support diversity and inclusion?

Rafeeq: “There is a direct correlation between retention of minority professionals and firms that make it a priority to support minority organizations like NOMA. Personally, JLA’s support of NOMA is huge. At previous employers, I could go days without seeing or interacting with another minority professional; we’re that underrepresented in the industry. But regardless of how great a firm is, it can still be hard to feel like you belong. Organizations like NOMA provide a deeper sense of community and belonging.”

Muhammad: “Several A/E/C firms have stepped up to support WISCO NOMA and we invite others to as well. We’d love to help more firms support an inclusive culture within their firm by sharing the value of NOMA membership with their teams.”

JLA: What has WISCO NOMA been working on this year?

Muhammad: “Right now, we are meeting virtually every month to plan our future events and programming. We’re excited to get going again. We’ll be focusing on youth-centered programming like workshops and camps to expose students to architecture as a career.  We’re also working on starting a lecture series in conjunction with the student chapter of NOMA at UW-Milwaukee.

Since we can’t do in-person programs right now, we’ve all gotten creative with individual pursuits to support the NOMA mission. Recently, I was able to tutor a group of AVID Tops students in conjunction with the BOSS Program here in Dane County. We did a workshop via Zoom where we walked students through how to use Google Sketch-Up. It worked out great because students were able to get into Sketch-Up on their own computers and follow along step-by-step to create their own designs.

On a national level, NOMA’s Project Pipeline program is launching a virtual summer camp this August.  This eight-day experience for middle and high school students provides students of color the opportunity to learn the fundamentals of architecture and design. And campers will get to work closely with architects and designers to create the designs they would like to see in their own communities.”

Registration for the eight-day workshop is $35; parents can sign up their children here.

JLA: Who can join NOMA?

Rafeeq: “Contrary to the name, NOMA has Allied Members that work as planners, engineers, and within the construction industry so it’s really open to all minorities within the A/E/C world. Our typical members are those that feel misrepresented or underrepresented in the industry and want further support both professionally and within the community.”

WISCO NOMA currently has 20 members and is always looking to expand its membership.  Those interested in joining NOMA can visit WiscoNOMA.com or reach out to Rafeeq or Muhammad directly at their contact info below. 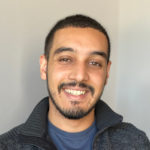 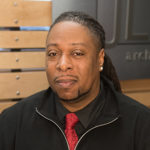